Begin the conference with a wonderful evening together with colleagues. Renew old friendships and make new acquaintances as we welcome you to Kaohsiung.

The Lianchitan (Lotus Pond) Scenic Area is one of Kaohsiung’s most traditional scenic areas, and was known as one of the “Eight Sights of Fongshan” during the Qing Dynasty. You will see the pavilions by the beach, massive statues of gods, the “old city” surrounded by the city wall, old houses and the villages for military families. You can also sample the food in the old streets and traditional markets of Zuoying. The Longhu Tower (Dragon Tiger Tower) is the most famous scenic spot in Lianchitan. Constructed in 1976, this tower is seven stories tall, and the dragon and tiger doors are its entrance and exit. Its walls are decorated with koji pottery, created by a variety of artists. The tower itself is connected to the Nine-Turn Bridge (Jiuqu Bridge) and is set off by the lake. There is a rule you need to follow when visiting the Longhu Tower: enter at the dragon’s mouth and exit from the tiger’s mouth; this will allow you to avoid bad fortune and enjoy good luck. Here you can enjoy a 360-degree view of Lianchitan’s scenery.

The Confucius Temple, situated on the northern side of the Lotus Pond.

This temple was built in the style of China’s Song Dynasty architecture, and more specifically in the style of the Qufu Temple in Shandong. It contains a bronze relief depicting the life of Confucius, and the four characters “Wan Ren Gong Qiang” on the wall praise the height and depth of Confucius’ great learning and virtue. This is the largest Confucian Temple in Taiwan, and it has a very majestic, solemn, venerable exterior. Click to see more: http://khh.travel/Article.aspx?a=6455&l=2&stype=1059&sitem=4140

Restaurant in the 85 Sky Tower Hotel

85 Sky Tower (Tuntex Sky Tower), situated beside Kaohsiung Port, is located in Kaohsiung's best-known area. Not only is this skyscraper an important landmark, but its design—its shape suggests the Chinese character 高 (tall or high)—features a wind tunnel which enhances the building’s safety. The 85 Sky Tower stands 347.5 meters tall, or 378 meters including the arial. It has 85 floors above ground and 5 floors below ground, and was completed in 1997. The elevators provide a dreamscape view of the nighttime sky when a height of 185 meters is reached, making one feel one is walking beneath a field of glittering stars.

Since its opening in 2011, Foguang Shan Buddha Memorial Center (BMC) has received several accolades including recognition by the International Council of Museums (ICOM), ISO 50001 certification, and the 2014 Certificate of Excellence, given it by TripAdvisor as the top-ranking tourist attraction in Kaohsiung.

The BMC is a 100-hall complex built to enshrine the Buddha’s tooth relic, now housed in the Main Hall. The Foguang Big Buddha, which sits atop the Foguang Building behind the Main Hall, is the landmark of the BMC. Within the compound there are art galleries, an auditorium which can also be used as a theater, a children’s gallery, and souvenir stores. In addition, visitors will be able to experience Tea Zen (禪), see sutra transcriptions, or join in festive celebrations at the Five Harmonies Pagoda.

Tianliao Moon World is the most developed mud volcano area in Taiwan and, to use the geological term, it is a “badlands”—a land of desolate, barren beauty. It extends from Tianliao to Qishan along Provincial Highway No. 28, a road which passes more that 20 mud volcanoes. The Dagunshui and Xiaogunshui volcanoes are most famous for their eruptions, which can surprisingly often be seen. The Mudstone Geographical Center, situated at the Scenic Area's entrance, offers illustrated explanations of the nature of mudstone, and will give you a deeper appreciation of  Tianliao Moon World.

The British Consulate at Takao

The British Consulate at Takao was constructed in the British style in 1879, and it is situated beside Shaochuantou Wharf with a mountain behind it and the sea in front. It is the oldest extant modern Western building in Taiwan, and was also the first consulate the British government built in Taiwan. The consul's residence and consulate have been preserved in their entirety, as has an old hiking trail which leads up the mountain. Here, where the sea and mountain meet, you can feast your eyes on Kaohsiung City, Cijin (Qijin) Fishing port and the fine scenery of Siziwan (The Sizih Bay). 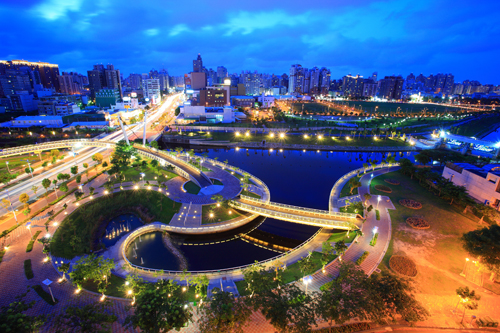 Love River begins at Bagualiao in Kaohsiung City's Renwu District, and it divides Kaohsiung City into two areas. The Jianguo, Cisian and Jhongjheng Bridges connect these, and the river flows directly into the sea. Love River had originally been a shallow creek, one which could only be crossed by ferry. During the Japanese Colonial era it was dredged and so became a canal, and was named The Kaohsiung River. This was the first time the river had been given an official name, and it was formally referred to as The Kaohsiung Waterway or The Kaohsiung Canal.

In 1948, the Love River Boat Company was opened near the Jhongjheng Bridge, giving people the opportunity to row up and down the river. This became a particularly popular pastime for local couples and so the river acquired its romantic name. However, the Love River, with its west bank in the Yencheng District, was also used for shipping and transportation, and over the years it slowly became a polluted open-air sewer. However, quite recently, with the cooperation of Kaohsiung’s residents, the city government and the private sector, it has been restored to its former splendor. The city government has recently renovated the bridges along The Love River, and these now emit rainbows of light after dark, creating a delightful visual effect.

The Soaring Dragon Fish Statue is located on the east bank of the Love River. It was originally created as a “theme lantern”, created for the 2001 Kaohsiung Lantern Festival. Once it was even used to promote Kaohsiung as Taiwan's Maritime Capital. The dragonhead and fish body symbolizes Kaohsiung, a city in the process of ongoing transformation. The Dragon Fish statue is 25 meters in height, weighs 30 tons and was built entirely of stainless steel. On festive occasions, flickering lights illuminate the dragon's body and the dragon breathes smoke.